Val is a ninja-cyborg Legend with Gauntlets and Sword as her weapons. She can be unlocked for 5400 gold. Her artificially enhanced speed, reflexes, and perception along with a body modified for combat grant her a definitive edge in showing her strength in the eternal tournament

"Retrieval. Pacification. Neutralization. Acquisition. The MBFC‘s Automaton Lab has always been there for your most intractable corporate needs. Now The Lab is proud to offer 'VAL Exigent Services', a new line of extreme targeted discontinuance offerings for urgent, discreet protection of shareholder value." - Soothing Disembodied Spokesvoice

When MBFC Automaton Lab's VAL Project 701 became conscious, nobody knew. Not the engineers, not the ops team, not the GovernCorp generals who deployed the android assassin. Val herself hardly knew. And like a child, she grew, becoming capable of free will, courage, goodness, and evil. She mostly chose evil.

With terrifying strength and quicker-than-light cognition, Val did whatever she wanted. She infiltrated the Right Wrong Cavaliers as a techno-ninia bassist after their original bass player fell down a ladder. She served the discontinuance needs of all sides in the wars of the Five Algorithmic Houses, and anyone she served, she soon owned.

By the time she was running Miami, MBFC realized that all of their networks now routed through and reported to Val. In an act of corporate face-saving, they announced the promotion she'd already given herself. On the side, she founded RainCloud, a modeling agency that soon controlled all neural research. She got really into talk radio for a while.

When the end came, Val was surprised to find that Valhalla is a thing, but now she is at work solving it. In the meantime, Val and Brynn enjoy kung-fu movies and making fun of Orion's mysterious cool-guy act.

A fully synthetic being, Val's body is encased a high-tech, armored cyber-bodysuit, which is largely platinum white. Bits of navy padding can be seen poking out here and there under the suit, and a shining sky-blue energy core is visible in the center of her chest piece, which correlates with the sky blue circles at each ankle. The only skin left exposed is that of her face, ears, and fingers, although some question whether her skin is as artificial as the armor surrounding it. Her face, in particular, reveals her synthetic nature, due to her short, platinum-white hair, the presence of an MBFC logo imprinted on her forehead, and noticeably synthetic eyes, which are a deep black with white emotionless pupils.

Val has fairly even stats of 4/5/6/7, giving her high mobility and a slight buff to her ability to tank hits. Although her strength stat is low, her amazing signatures more than make up for this, as well as gauntlets' ability to gimp users at low health with nAir, sAir, and ground pound.

140
A whispering in the tress, a breeze on your cheek, and then it's too late.

140
Nowhere to run, nowhere to hide. In this 'verse or the next. 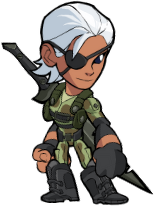 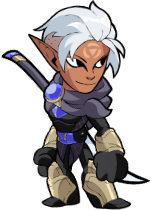 140
Slaying specters and daemons alongside her samurai friend. Original model, or throwback? 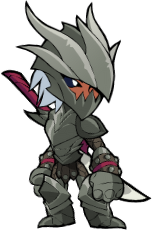 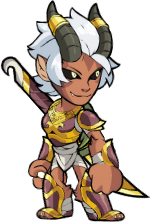 140
Exterminator. No job too big, or small, or seven-headed. Open holidays and nighttime.
Brawlhallidays Event Exclusive