The Unyielding Anvil, Son of Ivaldi

100
The Unyielding Anvil, Son of Ivaldi

Rare materials, wondrous items, and blasting magical furnaces are all in a day's work when you craft for the gods. - Mallhalla purchase description

Ulgrim is a dwarven Legend in Brawlhalla featuring the Axe and Rocket Lance as his weapons. He can be unlocked for 5400 gold. Ulgrim's skill at forging fantastical weaponry helps him in the eternal tournament, as he fights with his own creations with the same energy as he put into making them.

The Sons of Ivaldi are the original master craftsmen of Asgard. For eons, Ulgrim and his brothers have made mighty artifacts in their mystical forges deep underground.

Thanks to Loki and his gambling ways, other, upstart dwarves were chosen to forge Thor's hammer. Even though they botched the handle, they were still celebrated and stole the Sons' place of prestige. So was born a bitter rivalry that lasted for centuries, both sides constantly trying to outdo the other. But when the comet came crashing down, it was Ulgrim Ivaldson and his brothers that the gods turned to once again.

Only the sons of Ivaldi had the materials to build what was needed. For ages Ulgrim had harvested hundreds of impossible artifacts, a still flaming dragon's heart, the core of a dying star, Aesinite from the Nether realm. Nothing too rare, and no mine too perilous or too far for Ulgrim. The Sons' name was finally restored in a suit of golden armor.

Now he wields his flawless Ivaldi creations in the arena, proving their perfection with each win. When he isn't in the ring he can be found arguing fiestily with Scarlet on her contraption building methods. But always he keeps a glimmering eye on Orion and stays close. Some say out of pride, others say it's concern for what will happen if the armor were ever to fail.

"Pfff... Every smith knows the handle is the only part of hammer crafting that takes any real skill anyway." -Ulgrim, arms crossed

Ulgrim sports a mighty white beard, as per his Dwarven heritage, as well as an impressively spiky moustache and eyebrows. He wears a dark gray leather smith's apron over a tan work shirt, reflecting his profession as blacksmith to the gods. He also wears a simple gray leather cap, with straps loose either side of his face, which bears the symbol of Mjolnir, Thor's legendary hammer, printed on it's front. His eyes are perpetually covered in thick orangey-red gem-glass goggles that match the gems on his weapons, boots and the bands on his crafted metal gauntlets. -==Signatures== 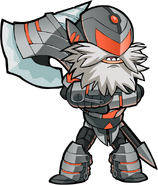 80
In space no one can hear you blasting asteroids for the best materials.

140
Eternal stone and an ever lasting arcane power. The best home security system. 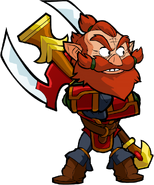 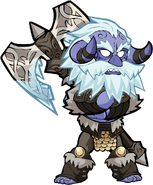 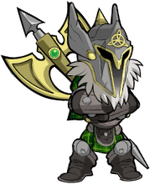