Each Legend has four stats that help define the Legend and make them unique beyond their weapon selection.

Each stat is measured on a scale of 1-10, with 10 being the highest. Stats may be modified up and down using Stances, but no stat is naturally above 8 (with the current exception of Xull, who has a natural 9 in strength, and Magyar, who has a natural defense of 9) or below 3. With stances, no stat can be above 9, or below 2 (with another exception of Xull with 10 in attack with the attack stance, and Magyar who can have a natural 10 in defense with the defense stance).

Every Legend has the same total of 22 stat points.

Affects how much damage is dealt by the Legend, along with how much force their attacks have. Higher Strength means opponents fly farther and take more damage for the same attack compared to Legends with lower strength. Signatures moves have unique damage and force values and are naturally unaffected by Strength.

Indirectly affects attacking speed - a Legend with high dexterity will have a shorter recovery time after an attack finishes, allowing for quicker successive attacks, as well as a shorter minimum charge time for Heavy attacks, allowing for faster execution. Shorter recovery time only affects different attacks - using the same attack again and again in succession will demand a minimum recharge time, to encourage variety. Signature moves also have a minimum 10-frame cooldown, even between different signatures, which is unaffected by Dexterity, though the speed with which a Legend can use a light attack after a Signature move is affected. Dexterity also does not affect the use of chase dodges of dodge cancel attacks. To see a complete table about the recovery frames after an attack, click here (Made by Dobrein).

Affects how much damage a Legend takes from all attacks, as well as how far the Legend flies when struck. High Defense means less damage, and less fly distance compared to those with low defense.

Affects how quickly the Legend is able to move around the battlefield when running and jumping. Movement during attacks and dodges is also affected. Does not affect attack speed, nor dodge duration. 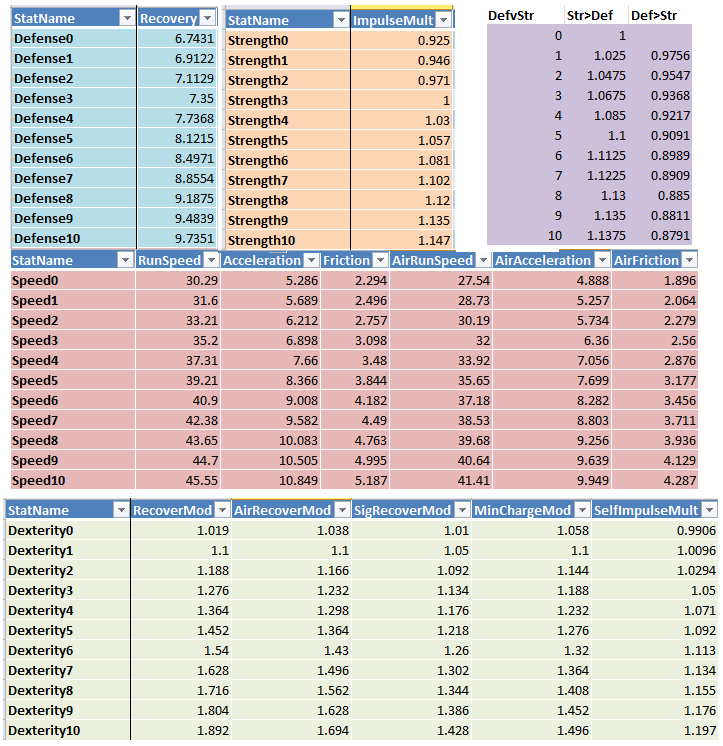