The Hammer of Justice

The Hammer of Justice

Sentinel is an American superhero Legend featuring the Katars and Hammer as his weapons. He can be unlocked for 2300 gold. Possessed of intelligence, determination, and a keen sense of justice, Sentinel combines these with powerful homemade weapons to achieve that strength and wit worthy of a superhero. With a lifetime's experience of besting criminals and super-villains, Sentinel has become a potent force in the eternal tournament.

"Good evening, America. Tonight on 'Night Owls with Henry Coates', we are discussing Sentinel. Who is this costumed vigilante? Where did he come from? Does he have a secret identity? More when we come back." -Henry Coates aka Sentinel

Few would ever know that Henry Coates, renowned physicist, all-star running back, and beloved host of the talk show "Night Owls" was also Sentinel, the first and greatest costumed superhero in America. Coates got PhDs in Chemical Engineering, Physics, Economics, and Literature before he got tired of filling out the paperwork. But when his father was shot by a cop in the pay of local crime boss Seven Fingers Dupree, Coates swore to devote his mighty intellect to fighting crime, and Sentinel was born.

Armed with weapons of his own invention, Sentinel fought his way to the center of a web of corruption led by a secret society known as KABAL. His war with KABAL lasted years and ended only when he destroyed their base in a Kamchatkan volcano and unmasked their leader, boyband megastar Josh Von Evilstein. Later, as America's most beloved president since Washington, Coates would still slip out at night to fight crime on the streets.

Now restored in Valhalla to the simple strength of his younger days, Sentinel revels in the Tournament. But recently he has seen that there are those in Asgard who need protecting and has turned his attention to injustice here.

"I'M a cliche? You're the bought judge." - Sentinel

Sentinel, as a superhero, fights in his superhero costume of a skin-tight black-and-blue sleeveless bodysuit - his chest, collar, and parts of the low leg are all a vibrant blue, whereas his shoulders, lower waist, and sides are a deep black. To complement this, he has reinforced boots and gauntlets of a mysterious metal alloy that appear a shining silver colour, and a utility belt of the same material and colour around his waist. He wears a simple domino mask over his eyes with downwards embellishments at each corner, and his short curly hair is shaved into a small mohawk. He is dark-skinned, which creates an attractive colour composition with the dark blue and black suit when combined with the contrastingly bright silver colour. 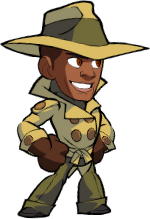 140
He knows what evil lurks in the hearts of men, women, and evil aliens.

140
Gained super powers after being bitten by radioactive lightning in his teens. 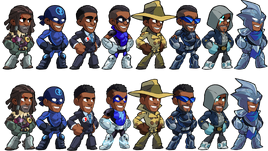