This reaper is playing for keeps! - Mallhalla purchase description

Nix is a die-hard freelance reaper Legend featuring the Scythe and Blasters as her weapons. She can be unlocked for 5400 gold. Nix brings the dark, deathly magic and weapons of a modern reaper to the eternal tournament, pairing this with fighting skills learned from a specialization in reaping hard-to-reap monsters for the afterlife to become an effective fighting force. She is no stranger to adversity, tenacious opponents, or intense battle, and fights with the ease and surety of someone who is on just another day on the job.

"The Ravenous Sloor's time was up, but we weren't staffed for getting that kind of horror to slip the mortal coil. When we needed a specialist, we called Nix." – Belzar, Ikruski God of Death and Volcanoes

Many cling to unfinished business on the mortal plane, and all need a guide to their next destination. Nix combines unmatched skill at collecting the very powerful and very unwilling with a uniquely independent worldview. She snatched the Unmovable Titan of Heraklion down to Hades, and on the return trip dropped the ancient Sphinx of Alexandria off at Anubis' front door. She dragged The Hundred-legged Banshee of Donegal kicking and screaming to the Realm of Arawn. The Undead Lord of Elyria was her first repeat customer, and a nice source of steady work.

Disaster struck when she took a job collecting an entire pantheon whose time had come. When the dust settled, eleven of the targets were missing. Nix is not the type to miss a mark, and professional pride put her on a thousand-year hunt that has led her finally to Valhalla.

Odin's warrior heaven is home to all sorts of metaphysical rulebreakers and rogue souls. Nix sees an opportunity to turn a nice profit closing a few cosmological cold-cases like the half-bear viking, that smug mobster, and maybe even the golden knight. In the meantime, she fights in the Grand Tournament, knowing her quetzalcoatl quarry must be here somewhere.

"I've done work for Hermes, Orcus, Namtar, lots of smaller pantheon jobs. I did overflow work for Osiris - just helping out, really. I valkyrie where I can - I like it because it's 100% commission. I wouldn't say Brynn and I are friends, but I respect her work. Psychopomping ain't easy." – Nix

Nix is one of the few Legends to wear a fairly contemporary style of clothing. Her half-length, dark purple and lilac jacket is worn over a long-collared dull gray blouse, both of which are torn and hang in an unkempt manner. Her arms, largely covered by the jacket, leave a small section of skin visible just before her fingerless gloves, also a dark purple in color. Her very dark purple trousers appear to be similar to ripped jeans, with large tears at the knees, leading to dark ankle-length boots. Her hair, as awry as her clothes, is long and straight, mostly hanging over her face. It is a dark purple color at its base, buts suddenly turn a near gray lilac color at its tips. Much of her face is put in the shade of her hair, but still visible are her deep violet eyes, set brow, and vicious smile, which is stitched by three dark stitches either side of her mouth.

200
Like sands of the hourglass...
Bonus: Soul gaze and toothy menace with expressions.

140
Serving her sentence...
And giving you yours.

140
There is nowhere to hide, now or in the future.

140
Sharks aren’t the most dangerous thing in the water anymore.
Heatwave Event Exclusive 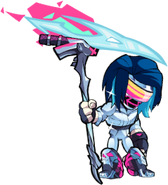