Brawlhalla, like many fighting games, gives players a choice of playable characters before each round. These characters, otherwise known in the game as Legends, are all unique in both their stats and weapon combination. Presuming the players in a game of Brawlhalla all choose different Legends, this means that from the very start of the game, each player will have different options available to them - this is sometimes referred to as an “asymmetric game.” The unique features of each legend gives them strengths, weaknesses and abilities that reflect each Legend's personality.

The roster of playable Legends is constantly growing. In 2016, Brawlhalla's development team Blue Mammoth Games announced their plans to release a new Legend every month.

Each Legend can fight with two weapons obtainable from weapon pickups, with no two legends having the same combination of weapons. When without a weapon, all Legends can also fight using an entirely identical set of unarmed attacks. These can be used as a method of combat in itself, used in combination with weapon throws for strings, or as an emergency fighting option.

Each Legend uses two weapons from a growing pool of weapons, meaning they all share a weapon with at least one other Legend. This means that players can easily switch between Legends, giving the game fluidity and variety. However, at present, not all combinations of weapons are represented by a Legend in the game.

Every Legend has a unique set of three Signature (or Heavy) Attacks for each of their two weapons, giving a total of 6 exclusive attacks to each Legend. As with Light Attacks, Signatures can be Neutral, Side or Down Sigs, requiring different inputs for different attacks. Different Signature attacks all have different appearances, purposes and behaviors, but often follow a trend (as outlined below).

Most of these Signatures can be charged to both delay the attack and increase damage. However, charging Signatures has some drawbacks. Firstly, a player charging a Signature cannot move (unless Slide Charging), leaving them in a dangerous and punishable position. Further, once a player has started charging a Signature, it will automatically activate after a small time, unless the player is attacked and the Signature interrupted. When the charged attack automatically activates, it will always deal maximum damage.

No Legend has Signature Aerial attacks, as both the Recovery (or Neutral Heavy) and Ground Pound (or Down Heavy) attacks are specific to the weapon, and not the Legend. One can argue that this means there is a distinct difference between Heavy attacks, which include aerial attacks, and Signatures, which do not, although the community tends to use the words interchangeably (especially in the heat of battle!).

A Neutral Signature (NSig) is usually aimed forward and upwards, or directly above the Legend. This often makes the NSig an effective anti-air attack when fighting airborne opponents. This is not always the case, however, varying slightly between Legends – see Ada’s Blasters NSig.

A Side Signature (SSig) is normally a forward-facing and far-reaching attack, sometimes also moving the user in the same direction. Again, this is not always the case, but is true for most Legends - Asuri's Sword, for example, has one of the most unusual Side Signatures, but even this is fairly similar to the standard. The Side Signature is always the same for both left and right directions.

The Down Signature (DSig) is often an attack that hits nearby to the player, often on both sides, and doesn't move the Legends. However, there is far more variation between Legends' Down Signatures, as many Legends have unusual or special-purpose attacks in this slot. For example, Lucien, Queen Nai, Thatch and many others all have unusual Down Signatures.

As well as weapon combinations being unique, each Legend also has a unqiue combination of stat values in Strength, Dexterity, Defense and Speed.

Dexterity determines how quickly the Legend recovers after performing a Light or Aerial attack, and how quickly afterwards they can do another. Legends with higher dexterity are more capable at creating strings of attacks, and can do so faster.

Defense affects how much damage and knock back the Legend takes when hit by an attack. More Defensive Legends take less damage per hit, and don't fly so far after an attack, making them harder to KO.

Speed alters the maximum horizontal movement speed of the Legend. It is worth noting that all Legends jump, fall and fast fall at the same speed, regardless of the speed stat. As well as this, the Speed stat has no affect on the distance or speed at which a Legend can dodge. Greater Speed means faster movement across the arena.

Each Legend has a total of 22 stat points distributed between their four stats. No stat ever goes below 3 or above 9 points unless altered by Stances, as detailed below.

In addition to the default distribution of skill points, there are also 4 stances available to each Legend, which can be unlocked as you fight and gain experience. (For further details on experience and Levels, see below). Each stance increases one of the Legend’s stats by one point at the cost of one point another stat - while the total still remains at 22, the maximum value for a stat becomes 10, and the minimum becomes 2.

Stances allow a player to alter a Legends stats for a range of reasons. Some use stances to make the Legend fit more with the player's personal playstyle. Others use stances to make a legends more balanced, or conversely to make a legend more specialist. Some players use stances very rarely as they feel it takes away from the personality of the Legend, whereas others use them frequently to experiment with Legends' capabilities.

Stances give Brawlhalla another dimension by which games can be varied, and further allow players to switch easily between Legends.

Each Legend is often accompanied by a section of lore that describes their personality and backstory, often detailing their life before Valhalla and their journey to the eternal tournament. In certain cases, the lore reveals that two Legends share small details of history with each other, or even fought each other in their pre-Valhalla lives. This connection drawn between Legend can be both explicit and significant, or minor and subtle.

Even though the lore of each Legend allows the reader to get a strong picture of every fighter, and their lives both before and during their time at Valhalla, much is still a mystery.

Regardless of the differences between the characters in the eternal tournament, every fighter is a powerful warrior of their time and worthy of the title "Legend" – while they may differ in time period, place of origin and personality, they all share a great skill and enjoyment in combat.

As you participate in matches using any Legend, it keeps gaining experience with every fight you win or lose. As experience is earned, each Legend’s Level will increase, with higher levels requiring more experience to reach.

As levels are gained, new colours and stances are made available to that Legend at certain milestones. Levels which do not unlock new colours/stances give the player's account more Gold to spend in the Mallhalla store. Note: this should not be confused with a player’s Account Level, which is specific to the account and not individual Legends, but still goes up every time a game is played. An account level will max out at level 100.

During development, some Legend ideas may end up on the cutting floor. Those known will be posted here. 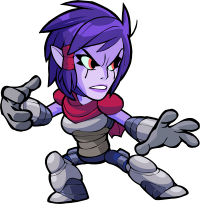