"Equally at home in the tundra or spirit realm." - Mallhalla purchase description

Kaya is an Inuit Legend featuring the Spear and Bow as her weapons. She was added on January 10, 2018 and can be unlocked for 5400 gold.

“Kaya, daughter of Kiviuk, the fate of all People is in your hands. If you fail, the sky will fall, the sun will vanish, and the world will be consumed by monsters. This is your destiny.” – Great Owl Spirit

When Kaya was six she could put an arrow through a falling snowflake. At eight she brought down two bison with one spear throw. At ten she was visited by an owl spirit who told her she would decide the fate of her world. More interesting to her, the spirit also showed her how to befriend the wooly mammoth.

Atop her great mammoth, Blue, Kaya became the beloved icon of her tribe, the People of the Lights. Kaya and Blue stalked every corner of the frozen tundra, finding adventure and amassing a huge supply of lost mittens.

In Kaya's fourteenth year, the Ice Titans thought to be only a legend, brutally attacked Kaya's village. The Titans pillaged or destroyed every store of food, skin, or kayak. Though still a child, Kaya and Blue led her people through the Northern Lights, straight into the heart of Jotunheim. In the Titan homeland, Kaya fought with the reckless bravery and tactical brilliance of one far beyond her years.

The valkyrie Hypernia saw Kaya's unconquerable heart and offered her a place in the warrior's heaven. In Valhalla, Kaya rejoiced in exploring the strange world of Asgard with her best friend, Hypernia's young daughter Brynn. Now, as Brynn has grown older, Kaya has begun to take an interest in the Grand Tournament as well, and she thinks perhaps she and Blue will give a try.

Kaya's outfit is a white and grey furry armor accompanied by a red ribbon around the waist. She wears grey fingerless gloves and grey boots. She has short, messy dark brown hair and red paint on her face. She's usually show with a confident smile.

Her spear is light blue, it top being shaped slightly like a trident. Her bow has a red grip and white, bonish design, showing a light blue elephant when doing a neutral attack

140
Can track a snowshoe rabbit through a blizzard.

140
Gliding over the frozen terrain on the prowl. 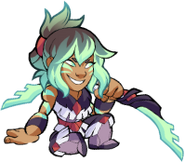 140
Setting the sky ablaze in the spirit world.

140
Last one down the slopes gets KO-ed! 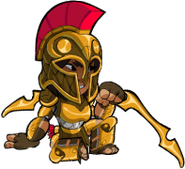 140
Missed the bus? Take a mammoth instead.
Back to School Event Exclusive 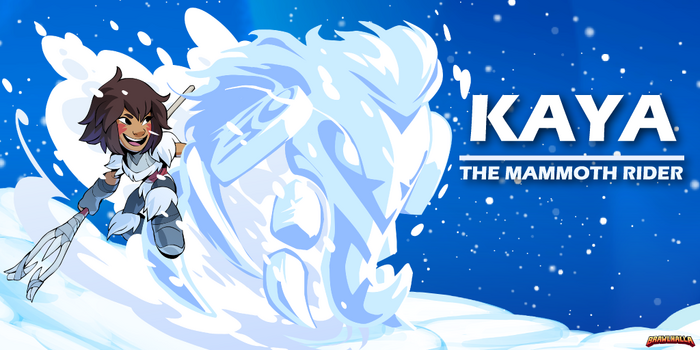