Master of the shadows and wielder of the deadly Daikama. - Mallhalla purchase description

Jiro is a shadow shinobi Legend of Brawlhalla featuring the Scythe and Sword as his weapons.

"Of course I suspect he 'removed' the previous 9 shoguns, but if he removes this one i can take over! Don't worry, I've got it all figured out." – Soon-to-be-Shogun Mizugawa

The masterful shinobi from the Iga and Koga clans were known far and wide. it was behind these clever diversions that the unparalleled Gensoujin family plied their trade.

Secreted away in the Realm of Twilight it was here that Jiro trained as a child. From the beginning, his reckless and unorthodox ways kept him in the top of his class and in trouble with the elders. When he was told to "use the darkness to your advantage," he convinced other trainees' Shadows to fight as his side and set a School record. Perfecting his Saiyokage technique, he began taking others' shadows for good and struck out on his own.

If the family dojo wasn't ready for Jiro, his targets in the mortal world were even less prepared. With each victory he added another shadow to his arsenal, Shogun Mizugawa's reign ended in the setting sun when Jiro's Shadow stretched over the fortress wall and sliced him in two. He hooked and set the Blood Moon with his Kusarigama to turn the Demon Shogun Yotsunaga mortal. Briefly. Most notably, Jiro employed the forbidden Full Eclipse Blade technique and Shogun Fujiyama disappeared under a flood of Shadows along with his entire army.

Now in Valhalla, some say Jiro is hiding from death, but Wu Shang says he's hiding behind the grand tapestry in the Great Hall as a part of the yearly hide-and-seek tourment with Kaya and Caspian. Together, Jiro and his shadows climb the rankings and are still all too happy to take a contract for the right price.

"We don't like to brag, but we're kind of impressed of how many people are here because of us. Did I say us? I mean me. Just one me." – Jiro, eyes shifting side to side and staring at the ceiling 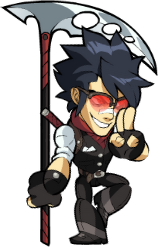 140
What hides in the light of the blood moon? 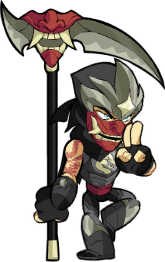 140
When everyone else has fallen, you are the shogun. 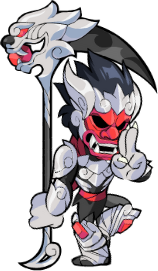