Fabled demon bride.
Vengeance burning in her veins.
It's too late to run. - Mallhalla purchase description

Hattori is a legend of Brawlhalla featuring Sword and Spear as her weapons. She was introduced to the game on August 26, 2014 alongside Thatch.

"The night is freezing I sense the spear-bearer nearing. It gets colder still." -#761 of Sokan's One Thousand Verses on the Demon Hattori

Young Hattori was so gifted with the sword that the Emperor offered a prize of one thousand horses to anyone who could defeat her. For years, new warriors came to court every day only to be defeated. But on the day the Demon Kagima arrived to challenge her, Hattori sensed his malevolent power and fled.

Enraged, the Demon kidnapped Hattori's three sisters and carried them away to his island kingdom. Horrified by the consequences of her actions, Hattori built a boat out of reeds and pursued the Demon. She was lost at sea until a stork lord showed her the passages between the twilight and the night to the Demon's realm. There Hattori found a bizarre world of talking stones and eight-armed ferrymen.

In the City of the Onyx Castle, she met Kagima's own brother, who offered to give Hattori his strength to defeat his brother, in return for her hand in marriage. True to his word, the Demon exchanged his own blood with Hattori's, and Hattori slew Kagima and freed her sisters.

She became Queen of the Island Kingdom, but the demon blood burned in her. It drove Hattori to wander the twilight passages until she discovered Valhalla. Through the eternal tournament Hattori slakes the lust for battle that threatens to consume her.

"A half-demon ninja who sold her soul to the devil? Well that's one, frankly rather negative, way of looking at it." - Hattori

Hattori wears a typical ninja outfit of dark burgundy and blood red. On her chest she wears a sleeveless burgundy jacket (or martial arts 'uwagi') edged with a blood-red cloth. This is tied down with a similarly bright red belt (or 'obi') wrapped several times around her slender waist and knotted at the back. While sleeveless, the chest piece does have simple dark red shoulder pads that taper to a point.

Her wrists are bound and wrapped in this burgundy and a blood-red cloth, and her lower legs have been similarly wrapped in cloth. Her legs otherwise wear tight-fitting pants (or 'zubon') and shoe-socks (or 'tabi'). Overall, Hattori's red cloth outfit is very tight-fitting and designed to allow full movement and agility. While her outfit is dark in places, the blood-colored apparel is designed to instill fear as well as allow free movement.

However, the most nightmarish aspect of Hattori's appearance is her face, which constantly wears a ruthless expression. Painted a stark chalk-white, but with bright red paint lining her lower eyelid and drawing a line halfway down her cheek, Hattori's facial image purposefully horrifies her opponents. The makeup implies symmetrical scars slashed into her cheeks, or perhaps the visage of her demonic eyes crying tears of blood. Regardless, Hattori's jet black hair both helps frame and accentuate the chalk-white and blood-red makeup, and is tied high on her head in a short, high tail with a bright red bow (or 'hachimaki').

The only color aside from red across Hattori's entire appearance is the unearthly yellow gaze of her eyes, betraying her demonic blood.

Hattori's weapons are delicately simple but with defining characteristics. Her Katana Sword has a plain, single-edged steel blade, which has contrasting bright and matt sides. The carefully crafted red leather binding of the Sword's hilt, done in a traditional Japanese style, is offset by the darker steel of the hilt handle. Hattori's Yari Spear has a simple black shaft, the base of which has simple rings and a small spike. The spearhead is an uncomplicated, two-sided blade attached with red leather. However, the spear has an asymmetrical, curved spike extending from the leather binding on only one side of the Spear's blade.

Hattori is clearly an assassin. Her main ability is to kill enemies one by one with an impressive enchainment of attacks. With her spear or her blade, her signature attacks are made to be combined with basic attacks that throw your opponent in the air. Once in the air, by only pressing the heavy attack button and releasing it instantly, you deal an impressive amount of damage and eject your opponent from the battlefield with a pleasant facility. Furthermore, she is an incredibly fast opponent, according to her stats. Her only weakness may be the defense, so make sure to dodge and don't let your enemies attack you.

140
Only Hattori, The Bride, and the Bruce can pull off this look.

140
Strike from the shadows and fade into the night.

140
Half-ninja, half-demon, half-robot, and enough attitude for all 3 halves.

140
Tonight, she'll be performing a tragedy! 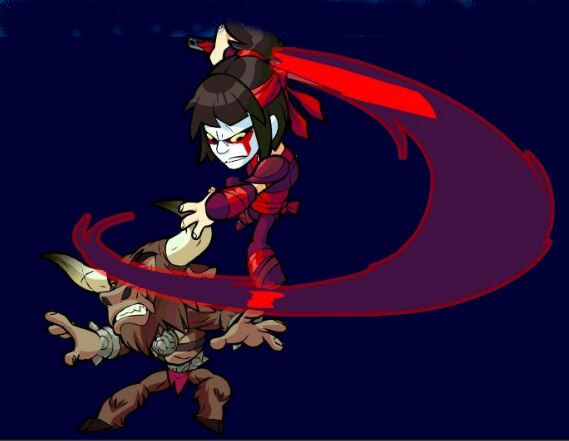