Older than history, tougher than rock. What you call monsters he calls breakfast. — Mallhalla purchase description

Gnash is a prehistoric caveman Legend featuring the Hammer and Spear as his weapons. He can be unlocked for 2300 gold. Gnash, one of Valhalla's earliest inhabitants (according to some, the very first), is a great warrior from Earth's the stone-age period - his animalism permeates through his single-minded ruthlessness in the eternal tournament's fighting as much as through his appearance, even if he seems to know or care little of his own role as a contestant.

"Archeological and DNA evidence both point to the existence of a single Super Hunter - one extraordinary individual whose dramatic life corresponds exactly with the time and place in human history that Homo-Sapiens avoided extinction and catapulted forward." -American Journal of Prehistoric Studies

In the darkness before the dawn of history, Gnash was raised by the harsh jungle itself. The lone hunter was called Long Fang by the saber-tooths, The Beast by the human clans, and Swift Death by the Primordials, an ancient race of savage cannibal apes The ruthless Primordials drove humankind to the brink of extinction before Gnash emerged to stalk their steps. He devised the very first 'plan' when he drove the last of the Primordials through the Great Crevasse to the Valley of the Never Setting Sun and trapped them there with a giant avalanche.

No one has been in Valhalla longer, and some say he was hunting these heavenly forests before Odin and company arrived. He continues to collect firewood, avoid darkness, store food for winter, and does not seem to understand or care that he is not still on Earth. He talks little about the Tournament, or anything else, but his winning record speaks for itself.

"(points to sky) (walks fingers on palm) (shows two fingers) (shakes fist) (points to self) Do I make myself clear?" -Gnash

Gnash is one of Valhalla's earliest inhabitants, (according to some, the very first). He is a great warrior from Earth's stone age period, with his appearance reflects this. Most notably, Gnash wears the skin of a saber-toothed tiger across his entire body, which is an icon of both his historical background and era-defining strength and power.

The bright orange head of the Smilodon tiger is the dominant feature. The tiger's golden dead-eyed stare rivals Gnash's own animalistic gaze, though the teeth of the prehistoric headpiece somewhat hide Gnash's own eyes. The two longest incisors, which are the saber-toothed tiger's namesake, frame each side of Gnash's face, whereas the animal's head has pale cream-colored fur at each side, matching tiger's maw which shows the animal's dark brown nose.

Gnash's own face, visible underneath the tiger skin, is dark from both shadow and sun-burnt skin. His pupil-less white eyes stare out from between the animal's teeth and sit in the black shadow of Gnash's deep-set eye sockets. Also visible are Gnash's thick and uneven teeth, stick upwards from his unshaven bottom jaw, and a large chin. Gnash's square nose is equally large, boldly jutting from the centre of his face.

The earth-shaking effect of Gnash's landing The orange fur of Gnash's headpiece is also present at Gnash's feet - the fur roughly wrapped and tied around each calf, but with Gnash's big-toed feet uncovered. Alongside the orange fur, Gnash also wears a light green colored material, presumably cloth, at his chest and forearms. The cloth, roughly sewn together with black thread, is tight-fitting and leaves his upper arms and legs bare, allowing full flexibility and movement. To match the look of the tiger skin, however, the green cloth is trimmed with pale cream at almost every edge, with a similar fur loincloth around his waist.

Gnash's weapons are the 'Smasher' and the 'Hunting Spear', both being primitive but powerful weapons. The hammer and spear share a simple pole of wooden that is rough and unfashioned, with a simplistic but effect stone head. The head of the Spear is a classic flint-stone blade, similar to a prehistoric hand axe, tied with white cloth strips to the wooden stick to form a most simple stone-age spear. The Hammer's head is also stone, though a much smoother and harder type of rock, forming a very large makeshift hammerhead. This is similarly tied with white cloth strips to the wooden pole. While neither weapon has any refinement or detail, both have a small strip of cloth wrapped around the weapon's base. 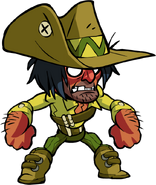 80
You call that a hammer? THIS is a hammer! 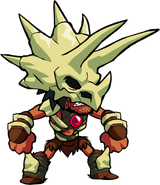 140
Whatever you do, don't tell him it doesn't actually make him fly. 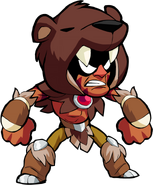 200
Mogar lets his fists do the talking (and thinking) for him. They are quite clear. 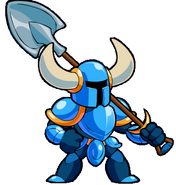 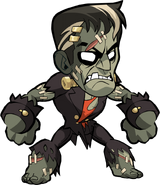 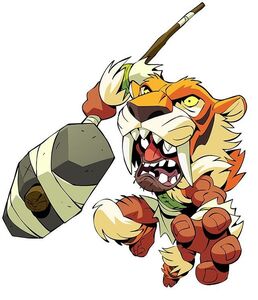