Dusk is a Legend featuring the Orb and Spear. The number-one enemy of the Elves has an Orb and a Spear as his weapons of choice, and 7 Dexterity for his best stat. His lowest stat is his 4 points of Armor.

"Dusk was the only prisoner here that mattered. Now the walls are smashed to bits and he’s gone. So I guess I’m retired." – Illidar, Warden of Elondil Prison

If there’s one thing the Elven King regrets above all else, it’s not killing Dusk thoroughly enough. It was Master Artificer Dusk who wove the mighty fabric of spells that created the great golem battalions. It was Dusk who led the golem assault on Asgard. And when the elves were defeated by Thor and the valkyries, it was Dusk whom the Elven King blamed.

Dusk was thrown into Elondil Prison, and for four hundred years, there he stayed. But he was not defeated. For two hundred years, in a bare and lightless cell, Dusk forged the tool that would free him – an orb made of stone and magic. And, for another two hundred years, Dusk taught himself to wield it, bonding the Orb to his will and turning the tool into a weapon.

When he was ready, the orb smashed walls and guards alike, and Dusk escaped Aelfheim into the great Fangwild forest. The Guardian of the Fangwild was not prepared for the strange new weapon Dusk wields and fell to his ambush. Styling himself the new Lord of the Fangwild, he gathered the power of the eldritch forest and schemes to overthrow both Aelfheim and Asgard. But the Fangwild is not so easy to master, and now Dusk is in Valhalla. Yet his ambitions run deep, and he is planning something big. Dusk and the new weapon he wields have taken the Grand Tournament by storm. Ember and Ragnir loathe him as a betrayer, but his intensity and ambition have gathered him a following among the less scrupulous legends.

"I use the magic of the elven-folk to make the doom of gods, not cookies OR presents for you." – Dusk to Kaya

A gray-skinned elf with dunny blue eyes shot through with bright pupils, Dusk's garb is elegant and wild all at once, reflecting his nature as a high-minded elf given to the grim madness of dark sorcery. His snow-white hair is shaved in a rough horse-mane, the tail of which is tied in a fold-up atop his head. His dull turquoise tabard is loosely cut, allowing him arms freedom of movement, but inched tightly at the waist with a crafted brassy belt, and topped with a thick, short cape of raven-black feathers, held together with a brassy collar. Three long raven-black feathers hang from the belt, covering maroon tights. He wears gray leather boots topped with gray leaf adornments, and matching shaped forearm bracers held on tightly with dark strapping. He also sports a single brassy earring and a perpetual sinister grin. 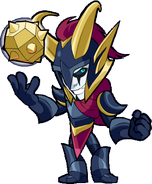 140
Punishment will be swift. 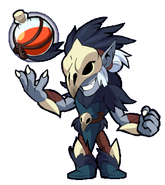 140
The mystic arts shouldn't be toyed with. 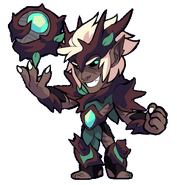 140
Seeks to eclipse the Fangwild in a canopy of thorns. 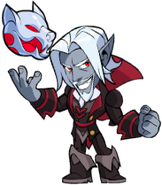 140
He wants to take your Elo!
Brawlhalloween Event Exclusive 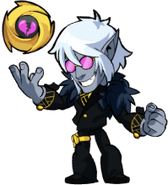 140
This man of mystery is ready to break some hearts.
Valhallentine's Day Event Exclusive